Lake Eyre is a large, usually dry salt pan in the South Australian Outback. Actually, it is Australia's largest salt lake. When it fills with water, it becomes a major tourist attraction and a heaven for bird life.

Located north of the Oodnadatta Track in a dry and isolated environment, the lake was named after Edward John Eyre, the first European who saw it in 1840. But it was not the "large inland sea" the early explorers expected to find in Australia's vast interior. 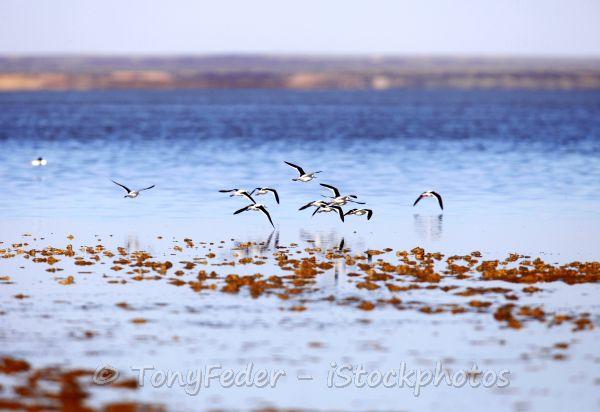 Birds during the rare water events

For the Arabana, the local Aboriginal people living in this remote area, Lake Eyre has always been Kati Thanda. In May 2012 the Arabana have granted a native title over the lake & the surrounding land. So it is quite natural that the official name was changed into Kati Thanda-Lake Eyre in December 2012.

Kati Thanda actually consists of two lakes, L. Eyre North (8 430 km²) and L. Eyre South (1 260 km²), connected by Goyder Channel which has a length of 15 km. The dimensions are best experienced from the air. Flight from Marree and William Creek are available.

The huge salt lake is the terminal point of Australia's largest drainage system, the Lake Eyre basin. The lake is also Australia's lowest point with 15,2 m below sea level in Belt Bay and Madigan Gulf.

On this page you will find

Click on the links to jump to the topic that interests you most. But there is much more when you read through the entire page. Explore an unique and fascinating natural attraction in the South Australian Outback with me.

Where does the water come from? 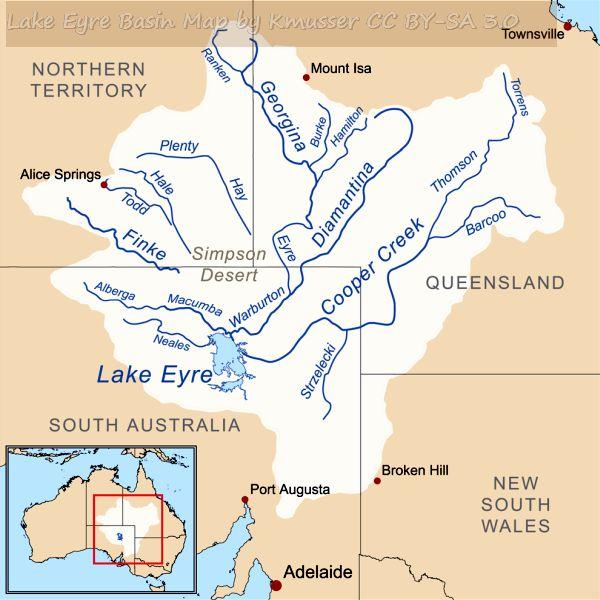 The main tributaries into the lake are the rivers in south-west Queensland, the Diamantina and Georgina river systems and Cooper Creek.

Although these rivers flow quite frequently, they hardly reach Lake Eyre every time they carry water. High evaporation, and the fact that the rivers fill many channels along their way to the lake, make it hard to predict whether or not they'll reach their final destination. Cooper Creek usually terminates at the Coongie lakes wetlands north of Innamincka.

After one of the most devastating floods in 1990, Cooper Creek reached the lake for the first time in more than 20 years. It took another 20 years until the Cooper made it to the lake again.

Western tributaries are the Neales and Macumba rivers. In 1984 and 1989 the western tributaries filled Lake Eyre South within a few days. Finally, the water overflowed to Lake Eyre North. This is recorded a very rare event, as usually the northern lake fills first, and overflows the southern part.

It is a fact that Kati Thanda had only filled to its full capacity three or four times within the last 150 years. Of course, minor fillings are recorded every couple of years. How much water is in the lakes can be only judged from the air. Satellite images give fairly clear information about water levels in the lake.

Any news of water in the lake gets locals, travellers and tour operators most excited. It is a well deserved increase of popularity and business in this remote area. Local air charters to fly over Lake Eyre are available from Marree and William Creek.

Remember, this is such a remote area, and public access is only through a two public access routes (PAR), departing from the Oodnadatta Track. You can't just drive out and see if the lake holds water on a Sunday afternoon :).

If you ever travelled along the Oodnadatta Track and detoured to Lake Eyre, you know this is a harsh and dry land. Beautiful, nevertheless. 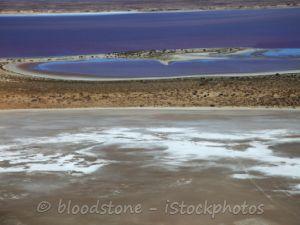 Water flowing into the lake 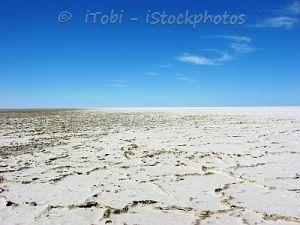 A dry salt crust on the surface

The basin covers more than 1 million km², or 1/6th of the continent, mainly in Queensland, South Australia and the Northern Territory. Globally, it is one of the largest internal drainage systems.
It is a closed drainage basin. This means there are no outflows to external rivers and seas. Look at the above map, can you imagine the huge distances water has to flow to reach L. Eyre? However, when you travel out there, you won't see much water most of the times.

But... when the water flows once every couple of years, it is a sensation for locals and travellers alike. It is amazing to see the changes in this dry and harsh land.

Would you believe there is even a local yacht club sailing the inland sea then?

Lake Eyre yacht club has its clubhouse and headquarters in Marree. And yeah, they are thrilled every time when water is in the lake.
The club supports those who want to take their own boat onto the lake, and they hold boating events, circumstances permitted. 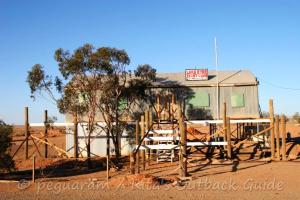 Headquarters of the sailing club 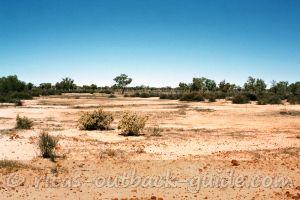 The wide bed of Cooper Creek

I will post updates when major changes happen. You can always use the above link to check if there is any water flowing into the lake. 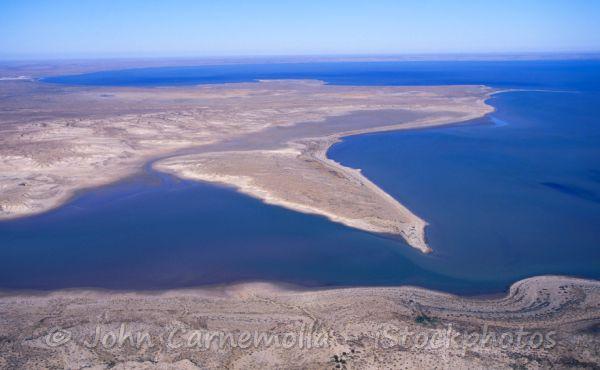 L. Eyre National Park covers an area of 13,000 km². It is a stark wilderness, an ancient landscape that is very hard to access.
Vegetation in this part of the Australian Outback is usually sparse. Creeks are lined with salt bush and acacias.
However, vegetation can burst into a blaze of fresh green and wildflowers after local rains.
It is also amazing to see large flocks of water birds migrating to the lake once there is some water. I always wonder how the birds "smell" the water!

How to get there?

Access to the lake and the national park is either from Marree or William Creek.
Near Curdimurka, the Oodnadatta Track comes very close to the shores of Lake Eyre South. There is a car park where you can catch a glimpse of the lake.
You are not allowed to walk out to the lake from here as this is station property. 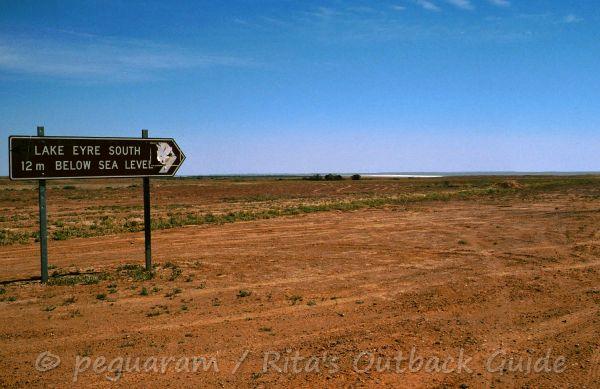 Getting to Lake Eyre North

Halligan Bay Track is the second public access route to the lake starting 7km south of William Creek. This is a 64 km track via Armistice Bore and ABC Bay to Halligan Bay. There is a basic campground with toilets.

Visiting Kati Thanda-Lake Eyre National Park requires a desert park pass, or an entry / camping permit. Both can be obtained in Marree and William Creek.

If you plan to visit multiple national parks in the South Australian Outback, it is worth to purchase a desert park pass which is valid for one year. The pass comes with a package of maps and a booklet with valuable information about safe travelling in the Outback, and information about flora and fauna in each park.

The Halligan Bay public access route and the campground are closed for safety reasons from 1st December to 15th March.

Please be aware that the routes to the shores of Lake Eyre cannot be compared with travelling along the Oodnadatta Track. You are going into very remote country, and track conditions can be quite challenging.

A 4WD vehicle with high clearance is required, and you should know the car, know how to use the 4WD properly when conditions get rough.
Camper trailers are not recommended, don't even think of towing a caravan to the lake's shores!

Take a HF radio or satellite phone with you, or at least a UHF radio. Contact William Creek via UHF Channel 4 and Marree via Channel 7 when you get in trouble. Carry plenty of water, and avoid these tracks during the summer months.

As always: Never leave your vehicle when you are in trouble. Someone will finally find you.

Caution: Please do never drive on the lake surface. It is an offence, and it is dangerous. Even if the surface looks firm and dry, you might get bogged in the mud if your car crashes through the salt crust (which is rather thin in places).

Don't miss the articles below which give you many more details about the route. 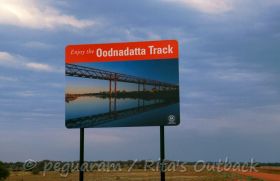 Get general facts, an introduction and overview of the track (617 km) 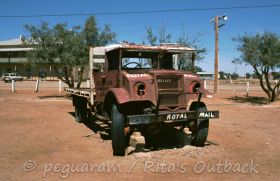 Marree - The start of the track

Discover the history of the early days in this fascinating town 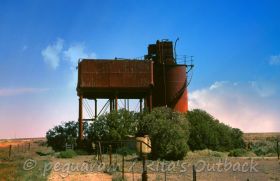 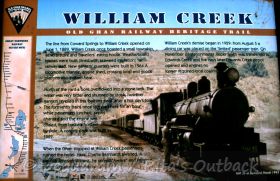 This small town offers everything a traveller needs. You'll be surprised what you'll find in this tiny village 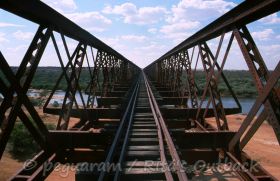 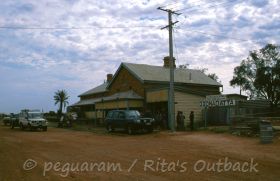 First discover the township Oodnadatta, before you go on the last leg of the track (211 km) 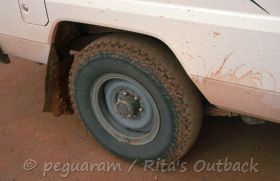 Road conditions along the route 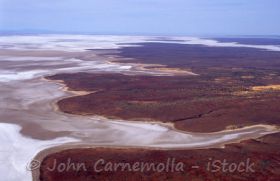 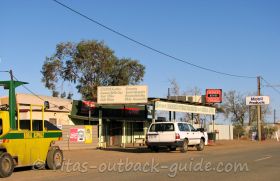 Find camp spots, where to get fuel, a good meal, and a cold beer 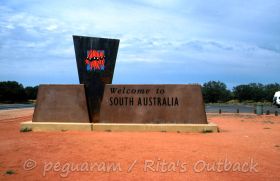 Outback South Australia is a wonderful place to explore, don't miss it

Enjoy this most interesting (and my favourite) track in the South Australian Outback.