Not all venomous snakes are dangerous to humans...

...so you don't need to panic about Australian snakes. Really!
There are about 2500 snake species in the world. In Australia live only 110 land and 32 sea snakes.
Now, why is everyone talking about the dangers of snakes in Australia?
Well, Australia is the only country, or region, that has more venomous snakes than non-venomous species. But not all of the snakes considered poisonous have venom that is capable to kill humans, or even cause severe illness. 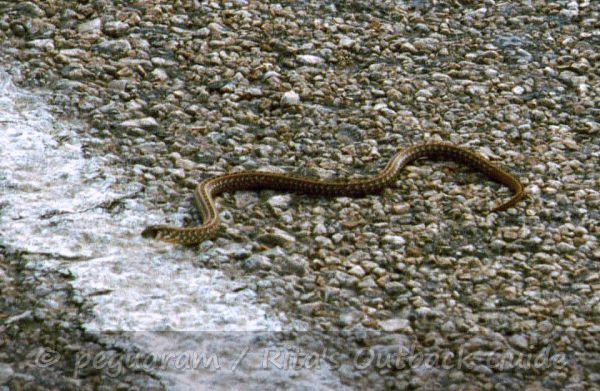 That's the snake I nearly stepped on

Correction: I got a message from Peter Comber who currently works for Zoos Victoria (Healesville Sanctuary). He also served on the committee of the Victorian Herpetological Society. Peter informed me that the "snake" in the above picture actually is a Common Scaly-foot (Pygopus lepidopodus), one of the many Australian legless lizards. Thank you Peter for the information.

Snakes can be found all over Australia, not only in the Outback. However, you will hardly see them. On all my trips I only saw a few snakes and I nearly stepped on one when I was walking along the Eyre Highway, see the picture above (at least I thought it was a snake at that time).
But this won't happen every day. Sadly enough, most snakes you will see in Australia are dead snakes, run over by cars.

I am going to introduce you to the most common Australian snakes, their habitat, how to prevent snake bites, and what to do when the rare case happens, and you get bitten.
As usual my motto is "Know what to expect in the Australian Outback, and you'll be safe".

Snakes are cold-blooded. They can't regulate their body temperature internally like mammals do. Snakes need the sun, or at least warm air temperature for their body heat. The colder it is, the more inactive snakes become. That's why snakes like basking in the sun.

Senses: Snakes can see, smell and hear. Most snakes have fairly good eyesight, at least over short distances. They hear with an inner ear that picks up vibrations from the ground. But their most important sense is the sense of smell. Snakes smell by flicking their tongues in and out their mouth.

Breeding: Some snakes lay eggs, while others give birth to living young.

Non-venomous Australian snakes include pythons, file snakes (a sea snake), and blind snakes. The amethystine python is by far the longest snake in Australia, it grows up to 5 - 6 metre. They live in northern tropical Queensland, mostly in rain forests. 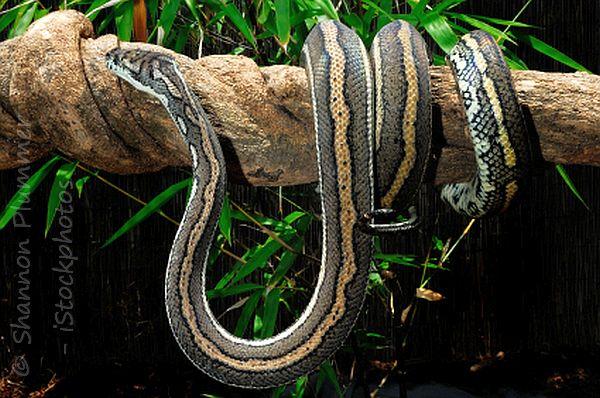 The most dangerous snakes in Australia

The Coastal and Inland Taipan

The coastal Taipan (Oxyuranus scutellatus), or eastern Taipan, is Australia's most notorious snake, and the longest of the venomous snakes.
It can grow up to 3m, the average taipan is 2,5 m. Sometimes it gets confused with other large brownish snakes. The typical feature to distinguish it from other snakes is the Taipan's pale face and large head.

When the snake feels threatened, or cornered, it defends itself without warning. When the coastal Taipan strikes, it usually injects a large amount of venom.
Before the development of anti-venom in the 1950s bites from the taipan where mostly fatal. Victims should seek medical treatment immediately.

The taipan inhabits the coastal areas in Australia's north and north east, from Brisbane to Darwin.

The Inland Taipan (Oxyuranus microlepidotus) is also known as fierce snake, or lignum snake. It is not as big as the coastal taipan.
As the name tells, this is a snake of the Australian Outback. The fierce snake can be found in the Channel Country of south west Queensland, north east of South Australia, and in the north west of New South Wales. 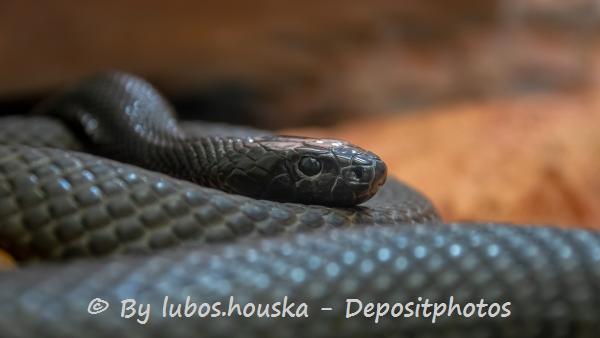 The Inland Taipan varies from yellowish-brown to dark brown, it is usually darker in winter. It is a shy snake that shelters in cracks and holes. However, if it feels provoked, it will strike, after raising its forebody to give a warning. If the offender ignores the warning, the snake strikes and injects its most potential venom.

Although the fierce snake is known as the most dangerous, and the world's most venomous snake, there are not many people bitten by this snake, due to the remote environment it calls home.

The Common or Eastern Brown Snake (Pseudonaja textilis) can be found in the eastern half of Australia. They live in open woodlands, in rural areas, but can be found at suburban peripheries of larger towns and cities as well.

The output of venom is low because of its undersized fangs. However, brown snakes cause more deaths in Australia than any other snake. Firstly, the venom is very potential, and secondly, due to the large numbers, they are most like to come in contact with humans.
Most of the bites by a brown snake are the result of people trying to move, kill or otherwise handle the snake.

The Dugite and Gwardar belong to the same snake family. Victims of these Australian snakes respond quite well to the anti-venom. 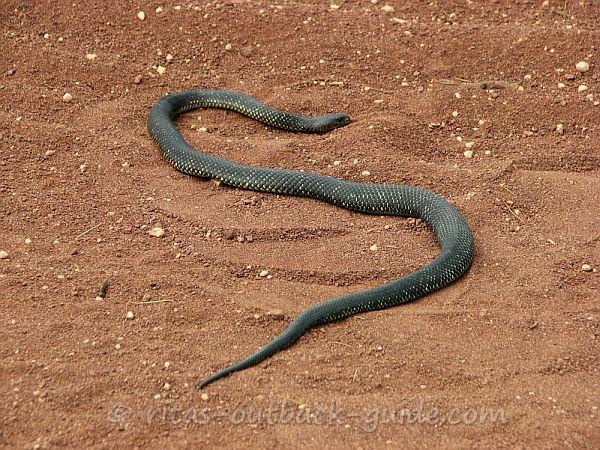 The Mulga snake belongs to the black snake family, not to the brown snakes. This is important to know when a bite needs to be treated, because a different anti-venom is required.

The Death Adder (Acanthophis antarcticus) is the only Australian snake that won't budge an inch, even if you're about to step on it. It lies camouflaged on sand, gravel or leaf litter so that its body is covered. It is most active at night, and can be found all over Australia except Victoria and the very south east of South Australia.

What do you do to prevent snake bites?

I got a message from an Outback Guide reader telling me that the above advice to stomp your feet when you see a snake is rather risky. This is what you should do:

"DO NOT STAMP YOUR FEET WHEN A SNAKE CROSSES YOUR PATH, this will provoke the snake to bite, stay perfectly still and let the snake move along.

Snakes' eyesight is not the best of their senses, they primarily work on smell and vibration. So if you stomp your feet in striking range, the snake will feel threatened by the large vibration and will strike the large blurry object; your foot/boot.

However, you should make extra noise as you travel on foot though grass and snake areas, as this will give the snake pre-warning that something large is in its area and it will move away and try to avoid you."

Thank you Peter Welsh for this useful tip.

Don't know how to put that pressure bandage on correctly? See the instructions on the Australian Venom Research Unit. Print it out and take it with you. You certainly won't need it, however, isn't it a good feeling to be prepared for anything? The correct application of the pressure immobilisation bandage buys you valuable time to transport the victim to a doctor.

Also, refer to the First Aid Kit Checklist and take the necessary items with you.

I am afraid, I had to say "don't do this and don't do that" a few times. I hope it helps you to do the right thing, and most importantly, you feel well informed and don't worry about Australian snakes any more.

Enjoy Australia and the Outback. Respect the snakes in Australia, they belong to the unique fauna in this beautiful country. 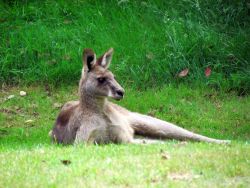 All unique animals of Australia 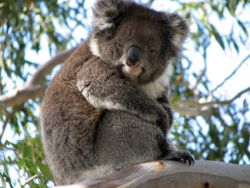 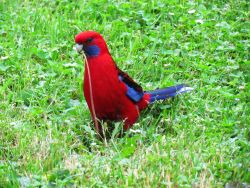 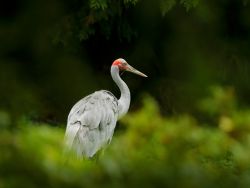 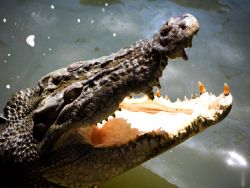 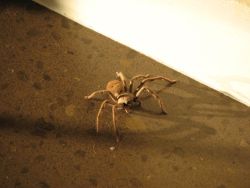 Spiders and other creepy-crawlies 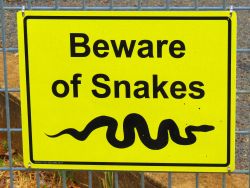 What you need to know about snakes 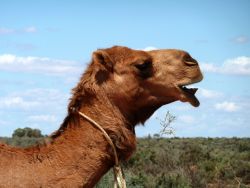